> Visit the registration > The booth reservation

In September, the domestic general plastics market stopped falling and recovered. Judging from the general plastics index monitored by the business agency, as of September 9, it was 851 points from 845 points at the beginning of the month, an increase of 6 points. The "Golden Nine" peak season has started, and the Mid-Autumn Festival holiday is superimposed, and the active demand for downstream stocking has turned for the better. At the same time, the price of raw materials ethylene and propylene has been strengthened, and the cost side has also brought positive support and obvious support, which is the main reason for the increase. 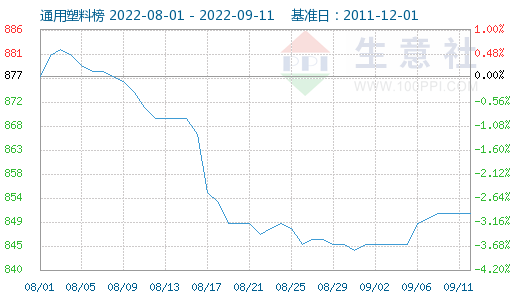 The trading atmosphere has improved, and the polyethylene spot market has risen as a whole 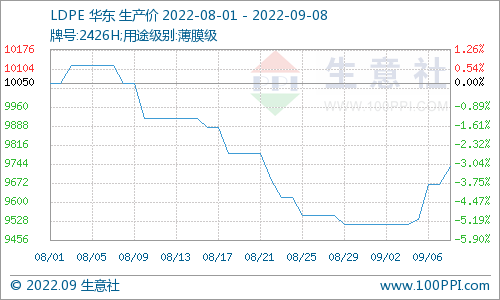 The polyethylene market has an eye-catching performance, and the price trends of the three major spot varieties have all improved. Since September, the overall increase has been 50-400 yuan / ton. Among them, LDPE rose the most, with an increase of 2.28%, and LLDPE rose by 0.81%. Although the international crude oil price fluctuated and weakened recently, the rise of ethylene and coal at the cost side brought good to the market. In addition, under the background of the "Golden Nine" peak season, demand was released, and the operating rate of downstream agricultural film increased. At the same time, with the arrival of the Mid-Autumn Festival, market transactions also increased. Petrochemical companies raised their ex-factory prices, the mentality of the industry was better, and the quotations of merchants followed up. 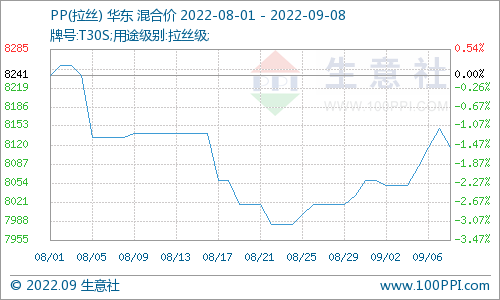 The operating rate of PP polymerization enterprises has not changed much recently, and the overall load of the domestic industry has remained at around 77%. However, the price of propylene at the raw material end rose, boosting the strength of PP. With the gradual development of demand in the peak season and the increase in stocking activities, the power and production restrictions of some downstream factories of terminal enterprises have been lifted, and the overall load has increased. Among them, the operating rate of plastic weaving enterprises and BOPP enterprises has rebounded significantly, and they just need to concentrate on stocking. Demand has driven the decline of PP inventory. According to statistics, the total domestic PP inventory has dropped to about 730,000 tons so far. Traders reacted to the increase in orders and strengthened their mentality, and their offers followed up with petrochemical plants.

From the perspective of the market outlook, according to the calculation of the 730 moving average rule of the business society, the general plastics index has crossed the 30-day moving average and started a downward trend since 2022/6/19, and the current two moving averages continue to move downward at the same time. According to the calculation of 2022/9/4, the probability of a change in the operating situation in the next 7 days (that is, the 7-day moving average crosses the 30-day moving average) is 31.79%. Analysts in the plastics industry of the business club believe that with the end of the staged replenishment of downstream enterprises before the festival, the consumption of market resources during the holiday period is slow, and the inventory pressure may increase, which may bring some restraint to the rising market, and the continued growth momentum is limited, or Consolidation is the main focus, and more attention needs to be paid to the situation of terminal demand.